Many brands already pursue to manipulate controllers directly with their hands just like they use tablets.
They also want to remove complicated components like buttons and simply control the crawler by using a touch screen or a control knob, like that of a Mercedes-Benz.

However, when we received feedback from our past and current customers, who have been using our products over the past 40 years, they complained about the touch screen and the portable tablet controllers, which we have tried in the past.

Why did they reject such a modern and convenient way? 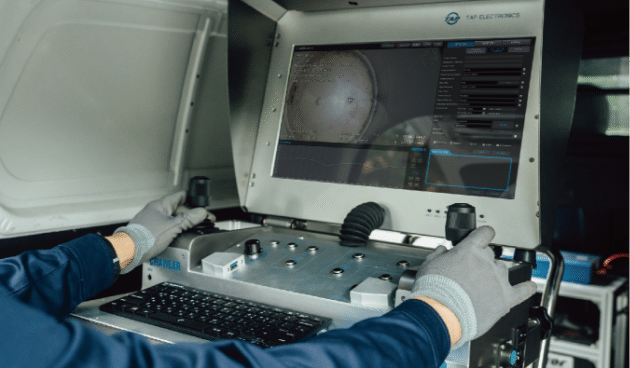 The reason is clear: It is due to their work environment.
Using a touch screen is less effective because they wear gloves, to which the touch screen does not respond. Also, quite often, the screen gets covered with water and dust.

Users want to see the insides of pipelines clearly even under the sun and want to properly monitor a large number of graphs and the status at the same time on a big screen.

This advanced controller comes with two joysticks: one is designed to perform the Pan & Tilt control of the camera head as well as the focus and zoom functions, while the other controls the left-right movement and forward-backward drive as well as the Cruise control.This ergonomically designed joystick can detect and control the acceleration of the crawler by simply applying forward pressure on the directional joystick.

The brightness of the LED lamp can be adjusted from 0 to 100%, and the camera head has the home positioning function that makes it easy to face it automatically to the front with a touch of a button.The advanced IR sensor function also allows the users to automatically measure the diameter of the pipe at the same time.

The system status is always displayed on the monitor, so the users can monitor or receive notification whether the crawler can be overturned by tilting more than the specified inclination value. The real-time temperature, humidity, and pressure sensors can display on the screen whether there is a possibility of malfunction due to water intrusion into the crawler.

The picture quality of this product is Full HD, which is much larger in size compared to that analog SD picture quality.The controller is equipped with a high-end PC that has an intel i5 7th generation processor, 32GB DDR memory chip, and SATA SSD-128GB storage device, which does not lose data even on impact.The Robocam S system controller has a digital recording program located right next to the CCTV video inspection monitor so that the users can easily understand its usage.

The users can conveniently record the inspection contents and capture still images in high definition at any time during the photographing test.
In addition, the recorded images can be safely moved to a USB memory stick or an external hard drive.

Every country has its own sewer line video inspection manual; there are different classifications such as subtitle location, content, and any abnormalities to bedisplayed on the screen.ROBOCAM S Typewriter is a program developed with constant devotion after thoroughly studying the subtitle standards of various countries based on their exporting experiences for many years. 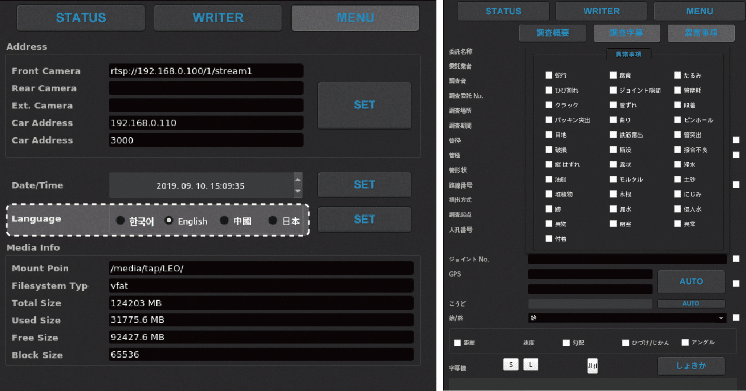 The controller has a built-in system written in English, Korean, Japanese, and Chinese; when the users select a specific language from settings, the computer reboots and displays the screen in the selected language.Even the location and content of the detailed subtitles are changed to suit the sewer line inspection manual of each country.

The UI is set in a way that the subtitling program, just like the digital recording program, is located right next to the pipe inspection image screen.The inspector can freely write any required subtitles during the sewer pipe inspection services on the screen using the keyboard at any time and also display various defect descriptions saved in advance.

Usually, each time a new course of investigation is carried out, the subtitles get erased, which is an inconvenience that requires rewriting the subtitles over. In this sense, Robocam S is convenient to use as it has the functions to save and recall the subtitles. 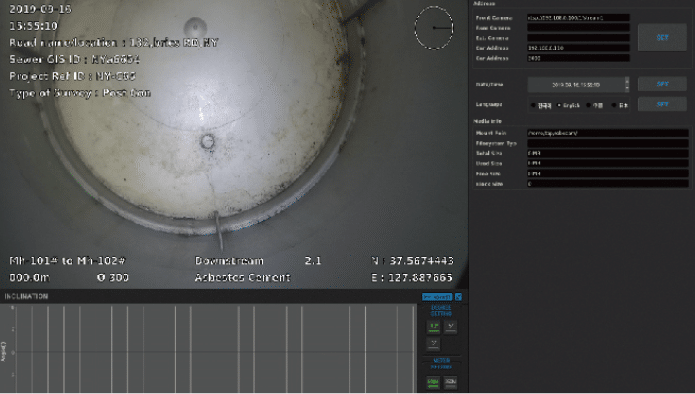 If the users want to use the Wincan reporting software program’s real-time reports and subtitle display function, instead of Robocam S’ subtitle program, they can do so by removing all the subtitles prior to connecting to Wincan.

High-Technology That Can Measure Pipe Inclination and Its Diameter

When installing new sewer lines and managing existing pipelines at regular intervals, the measurement values that are universally required are measurements of the inclination and size of the pipes.The pipe inclination technology of other existing products simply develops a low data value in a graph with a gyroscope sensor, but the Robocam S controller has a special function that filters and converts the value with no errors.

Generally, when a crawler runs through a sewer line, it overcomes a variety of obstacles. During this time, the crawler is inclined irregularly and excessively, but the program intelligently corrects the unexpectedly protruding data value and expresses the stable inclination value as a graph.

Email or call us anytime.

This website uses cookies to improve your experience while you navigate through the website. Out of these, the cookies that are categorized as necessary are stored on your browser as they are essential for the working of basic functionalities of the website. We also use third-party cookies that help us analyze and understand how you use this website. These cookies will be stored in your browser only with your consent. You also have the option to opt-out of these cookies. But opting out of some of these cookies may affect your browsing experience.
Necessary Always Enabled

Performance cookies are used to understand and analyze the key performance indexes of the website which helps in delivering a better user experience for the visitors.

Analytical cookies are used to understand how visitors interact with the website. These cookies help provide information on metrics the number of visitors, bounce rate, traffic source, etc.

Advertisement cookies are used to provide visitors with relevant ads and marketing campaigns. These cookies track visitors across websites and collect information to provide customized ads.

Other uncategorized cookies are those that are being analyzed and have not been classified into a category as yet.

SAVE & ACCEPT
Shopping Cart
There are no products in the cart!